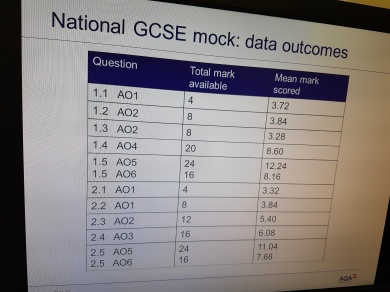 It was taken at an AQA subject hub. Like everybody else at the hub meeting, I was reassured. Yes! I thought. My students all got about 4 out of 8 and everyone else in that sample ended up with 3.28 out of 8 AND THEREFORE WE ARE WINNING. I posted the picture and then all my Twitter friends seemed to be reassured too. Then, on my drive home, I had some kind of moment in which my brain caught up with itself. I was listening to Will Self, on Radio 4’s A Good Read. I was half-listening to Self and half-thinking through the notion of grade boundaries and that picture from the hub.

Will Self, who always intimidates me with his intellectual ferocity, came out with something that caught my attention. It was an aside, really. He said that Doris Lessing’s novel The Grass is Singing shouldn’t have included a murder (if you haven’t read it, it opens with a murder). As an aside, he said it would have been a better novel without the murder. He tore the premise of the book apart. Just like that.

For some reason, this made me realise that the mean scores of 30,000 students still don’t mean anything. Just as The Grass is Singing  would be better without the murder, it would be better without the mean scores. By ‘it’, I mean everything. Life. Marking. Teaching.  It doesn’t really matter if our own students did better or worse than everybody else in this one test. The same holds true for PiXL Curve. It’s all a distraction. We don’t even really know how we’re marking compared to other schools. We don’t know who was in that sample of 30,000 (Selective schools? State schools? Schools with high levels of disadvantage? Schools for SEND pupils? Year 10 pupils? High levels of EAL?). We don’t really know the implications of those cohorts in a sample. We don’t know where the boundaries will be and we won’t know until after the exams. Even then, they’ll change for the following year.  Dawn’s blog is the best place to go for clarity on this. I’ve also blundered my way through something of an explanation and OfQUAL have recently reiterated the importance of not trying to predict grades at this point.

I do understand that it’s good to see a range of marks. It helps us to pinpoint some kind of clarity on where we stand in a huge, huge national rank order. Essentially, though, we need to consider why we want or need this data. It’s not helpful or healthy to fixate on it. I’m as guilty as the next HoD – I posted that picture, after all.

What we need to focus on is doing what we’re all doing already. Teaching thoroughly, thoughtfully and with total focus on helping the students to achieve their very best in those exams. Forensic attention to the mark scheme and lots of practice.