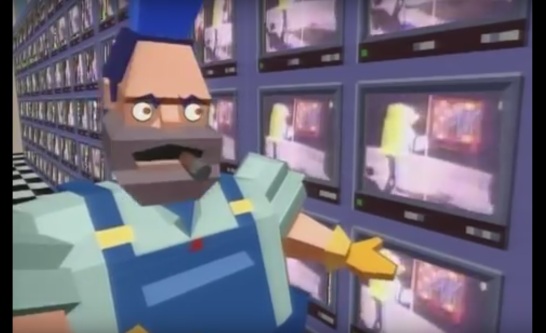 My mother-in-law keeps receipts and seems to return anything and everything to any and every shop. I’ve never known her to be refused a refund. She has taken back beef to Morrisons after we’ve eaten it – ‘it was too sinewy’. A coat was returned to TXMaxx Cribbs Causeway because she found it 50p cheaper in TKMaxx Weston-super-Mare. Some 19p onions went back to Lidl – I can’t remember why. Curtains were packed up and taken back to Dunelm after hanging them, as too much light came in through the eyelets. She took some printer cartridges back to Tesco because she thought they should have lasted longer. Her best achievement was getting a free packet of seeds because the original packet grew flowers that didn’t look like the ones in the picture; the leaves were much bigger than the representation. The original packet had been a free gift.

I love these stories. I tell my friends, usually gilding the lily as I go.

Jill (my mother-in-law) thinks that I think she’s bonkers. Actually, I don’t. I just think that time is an expensive commodity and I am too time-poor to dash around the south west returning relatively cheap goods.

When I buy something of worth, though, I do expect it to be of a certain quality. If it’s faulty, or substandard, back it goes. It’s annoying – a massive inconvenience. It’s the inconvenience that bothers me more than the fault. You, me and Jill are all within our rights to return something if it doesn’t do what it says it will do, though, or if it’s faulty. It’s a statutory right.

We need to talk about TES.

@JamesTheo has adequately covered the endemic problems with plagiarism on the TES resources. People are profiting from selling other people’s work. Read his blog – it’s excellent.

I have noticed another problem, though. Many of the resources on the TES are rubbish. Utter rubbish. This is a problem for many reasons:

The ‘preview’ feature does not allow you to check whole resources. This claim is a fallacy. You can see a couple of images – most are blocked out and some are photographs, intentionally out of focus and impossible to read.

It’s too easy to blame the teachers who purchase these resources. It’s not fair to blame the consumer. They are choosing to pay for a product. If the product is not fit for purpose because it’s been misrepresented, then a refund should be available. It’s nonsensical that the TES don’t offer this option.

Look at this comment (below) given for a resource.The purchaser asks for the scheme of work. Somebody has paid for this resource (a Jekyll and Hyde ‘scheme of work’) but it’s just a load of power-points. Evidently, it doesn’t make sense to the person who paid for it. Rather generously, it’s been given 4 stars. If you pay for something that is advertised as a ‘scheme of work’ and you feel that the ‘scheme of work’ is missing, then you should be entitled to a refund.

On initial inspection, the resource (below) looks like a dream come true – especially given our current context; we’re all muddling around with just 3 measly Specimen Assessment Material resources (SAMs) from AQA and no bank of past-papers to rely on. The resource very clearly says, ‘10 x Paper 2s’ and then ‘Paper 1 x 1.’ The preview function only allows a view of a couple of pages and they appear to look okay, especially to a novice or somebody who’s after paper 2. So, you pay your money and think you’re set up for some practice exam questions.

However, a review gives a different story. There are 5 copies of paper 2. There are 7 paper 1s. This is a major error on the seller’s part. You’ve paid your money but the resource isn’t fit for purpose. No refunds, though, remember. 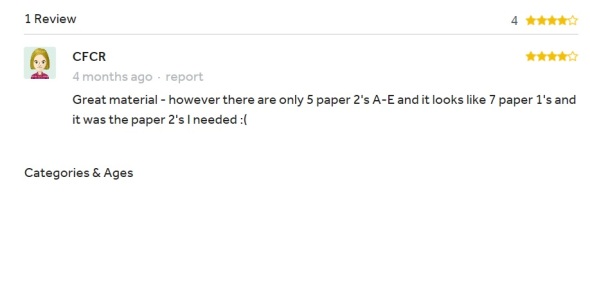 Anachronisms (that’s not quite the right word, but hey – at least you’re not paying to read this!)

There is another glaring issue with the paper above. English Language GCSE requires that students read texts from the 19th, 20th and 21st century. The second source in paper 2 will be from the 19th century. Paper 1 will only include a source from the 20th or 21st century. Yet the author of this source doesn’t seem to know this crucial fact (it’s a bit small – it says Jane Eyre, published in 1847):

It can be a really good idea to encourage the reading of different texts from different centuries. To put a mid-19th century text into a practice exam paper, though, is misleading for new teachers – or for any of us, grappling with the huge changes we’ve seen over the years.

Along the same lines, this resource looks promising – practice for paper 1:

The cover image has been taken with a camera and is so out of focus that you can’t see the resource, though:

However, when you click on the second preview file, it’s clear that it’s based on Mary Shelley’s Frankenstein, published in 1817. It’s exactly 200 years old and it’s being sold to teachers to use as a 20th or 21st century text. No refunds available.

You say tomato, I say non-fiction

This one really matters. Paper 1 assesses the reading, interpretation and analysis of fiction. Paper 2 assesses the reading, interpretation and analysis of non-fiction. The skills are different. The tasks are different. Not, it seems, for some TES authors. There are many, many examples of non-fiction being used for paper 1 and vice-versa. It’s unsuitable for the teaching of the specification and could cause problems for children being exposed to these resources. For example, imagine a faculty on its knees with an inexperienced HoF and somebody on long-term sick leave. It’s totally plausible that a HoF could resort to purchasing resources such as this for cover lessons. I’ve done it, although I bought Teachit’s Take Cover – more expensive but clear, organised and quality-assured. They offer refunds, for a start. Anyway.

One example was the use of a David Attenborough article and a Helen Keller autobiographical piece for paper 1. I actually pointed this out to the authors. I must stress that you cannot comment on resources on TES unless you’ve paid for them, hence the use of Twitter for this:

The Attenborough piece was removed. Keller remains on there:

Most people I know make typos. I make loads. I usually find about 7 after publishing each blog and re-save the update only to find another. I submitted my MA dissertation and then realised that I had a Table 1 and a Table 3, but no Table 2. It’s easily done.

It makes for a poor-quality resource, though, when you’re selling something to use for English Language GCSE and it’s got errors throughout, or it’s poorly written. This resource, below, is advertised as ‘stretch and challenge.’

It includes a ‘model answer,’ presumably an example of how to get the top grade in paper 1, section B. It’s actually really poorly written. I don’t want to be offensive, so I have left the author off this one. The writing is forced and it’s not actually meeting the criteria for the narrative response. The repeated one-line paragraph is okay, I suppose, and more realistic for a GCSE structural device, but it’s not been done to a top-level standard. The thing that drew my attention to this one, though, was the use of a commonly misheard and misused word (circled). I find it alarming that adults are selling these resources as models of top-level responses for an exam question that requires a ‘high level of accuracy’ to achieve the top band. Modelling is key to effective teaching but it’s actively detrimental if you model incorrectly-used words (and thanks to @HelenMars4 for clarification on this):

So, TES, I think your refund policy needs addressing. TES authors, if you feel that you are comfortable with charging teachers on the same pay-scale as you, for work that you’ve already been paid from the public purse to do, then make sure you do a good job of it.