Preamble: I’ve transcribed part of a lesson, having filmed myself teaching. I wanted to demonstrate the process I went through to improve responses to AQA P1, Q2 and AQA P2, Q3. I plan to use this with my faculty, some of whom are also filming their lessons for internal CPD.

Whether you’re an examiner for the board or marking your own mocks, you’ll know that one of our biggest challenges is getting the students to write about the effect of language and structure. It’s also hard to move them on from the generic comments – this makes the reader want to know more/this makes the reader intrigued/this makes the reader ask themselves ‘why?’ and so forth. Even our most able students fall into the trap of using this padding. Crucially, what’s missing from these statements is the next part. The “…because…” and then the contextualising of the because.

My colleague, Jo, suggested to me that the problem lies in the word ‘effect.’ Perhaps we need to encourage them instead to consider the ‘impact’. An impact is immediate. It’s something that hits you. The word ‘impact’ also makes explicit the relationship between the reader and the text. It’s something to consider.

This section refers to a set of exam papers I put together.  You can click here for a link to the set. There are exam questions for them all on the accompanying PowerPoints. If you want the Word documents then send me a DM on Twitter.

This blog is really a description of what I’ve done with my year 11s over the last term. With regards to the inclusion of a transcript, I find it helpful when I read others’ blogs with lesson transcripts, so I thought I’d try it here.

The student response below is taken from E3 in the attached files.

I usually put a real response under the visualiser. This is a routine part of almost all of my lessons. The students volunteer to have their displayed. If this is not part of your classroom culture then perhaps this won’t transfer so easily. Here’s the response that relates to the transcript:

“The writer uses the phrase ‘streets so smooth and tarred that he itched to lay his cheek down on them’ to give an effect on the reader. It really makes the reader want to read on and wonder why the road is so appealing. The word ‘itched’ shows that he Ugwu really wants to touch the road.”

SB: Marek, you’ve not actually addressed the question in your opening sentence. What is Adichie showing here? [Student gives a response, inaudible] Right – good – let’s edit that. “Adichie describes Ugwu as excited about leaving the village…”

Now let’s edit the quotation. It doesn’t need to be this long. How could we cut it back? [inaudible again] Good! “…he itched to lay his cheek down on them.”

SB: You’re right. I hadn’t noticed that. How can we make it make sense? Read out to me what you’d write, including the punctuation.

Jessica: I’d say, “Adichie describes Ugwu as excited about leaving the village, even about the tarred streets: “he itched to lay his cheeks down on them.””

SB: Thanks. Now, do we really need the line “to give an effect on the reader”? This could apply to anything and the response loses nothing if we delete it. [At this point, we all turned to another extract and considered if this line would fit for that one. They decided it would and I covered the word ‘generic’]

The same is true of “…want to read on and…”. Let’s get rid of it – again, it would work with any extract. It’s generic and so you won’t be awarded marks for it.

We need to add “because” after the word “appealing”. It’s not enough to assume that the examiner knows that you can infer that Ugwu liked the streets. Let’s explain why. Jessica, what does ‘itched’ suggest?

SB: Great. Let’s add it. Is he actually itchy? No. So we can use some subject terminology here too. “The metaphor ‘itched’ implies a deep, burning desire within Ugwu.”

Now we have a decent, specific comment but we need to bring it back to Ugwu and his journey. What, specifically, are we learning about Ugwu here? Yes, Mohamed? Use a sentence starting with “specifically,” please.

Mohamed: Specifically, it demonstrates that everything is new and exciting and he wants to experience everything around him to the full extent.

SB: Great. Now, let’s get back to the word “itch” and link it to his feelings about leaving the village. I’m going to start you off with “He is totally overwhelmed, almost as though…” yes – Mohamed again – go for it.

Mohamed: He is totally overwhelmed, almost as though…he feels a physical ‘itch’ to fully experience something as simple as the streets.

“Adichie describes Ugwu as really excited about leaving the village, because he’s even about the tarred streets: “he itched to lay his cheeks down on them.” It makes the reader think that the street was really appealing to Ugwu, because the metaphor ‘itched’ implies a deep, burning desire within him. Specifically, it demonstrates that everything is new and exciting and he wants to experience everything around him to the full extent. He is totally overwhelmed, almost as though he feels a physical ‘itch’ to fully experience something as simple as the streets.”

This is a level 4 response. It’s not perfect but it’s decent. It’s a huge jump up from the starting point.

I now have the following words on my board (laminated and blu-tacked):

…and a few others. If you want these, you can click here for a copy – it’s not a lot but will save you a 10 minute job!

These can also be used as analysis prompts when modelling for the class. The following photo is of a P2 analysis I led my Y11 through. The crossed-out part was from a student’s answer. He volunteered to have his work on the board, having identified a particularly generic response. You can see here how we’ve developed responses, using these key words. If you’d like a copy of the papers I have made for P2, using the AQA booklet, click here. 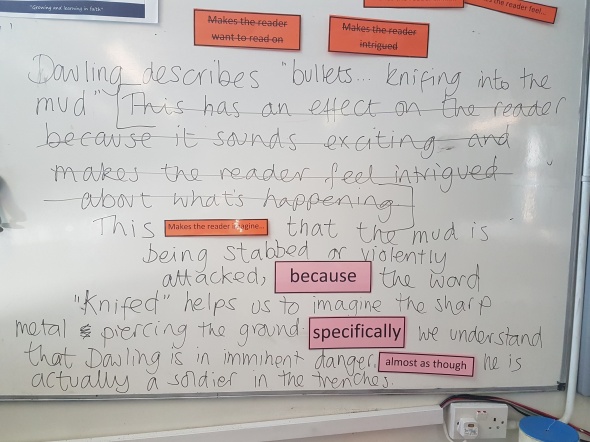 Again, it’s not perfect but you can see the starting point and how they progressed.

Below, are two more examples from my students’ books (published here with their permission). Again, they’re not perfect but these were done independently after just three lessons of this approach. Relevant context of each child is provided. 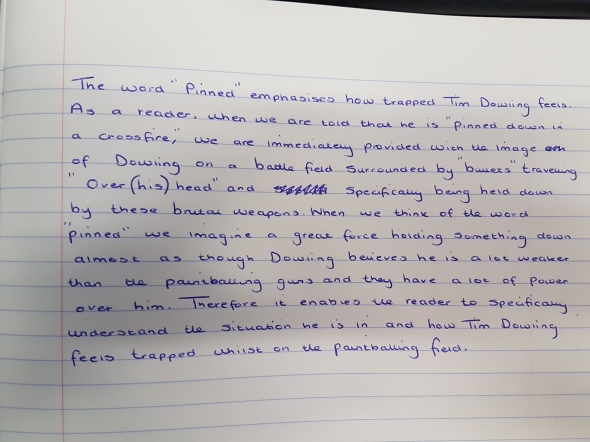 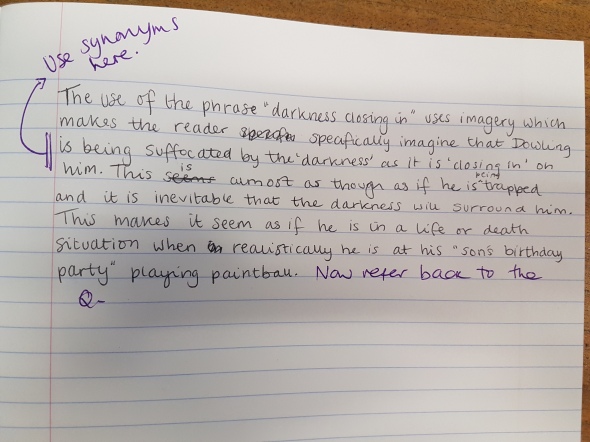 The biggest pattern in papers I’ve marked, across all abilities of students, is their failure to really grasp the effect. While these examples are rather short, they’re incredibly well-developed compared to the “makes the reader want to read on” that we started the year with.

Do contact me with any comments or questions on this.