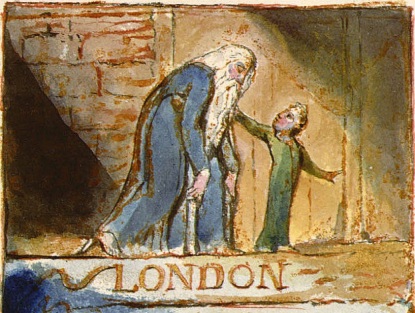 William Blake’s London, nestled quietly between Shelley and Wordsworth in the AQA Power and Conflict cluster, doesn’t immediately shout of ‘power’ as Ozymandias does, nor of that churning, internal conflict that we expect from the quintessentially Romantic Prelude. It fits in this cluster perfectly, though. The depth of Blake’s internal conflicts; his own battles with religion, science, and the establishment; the compassion he harboured for the plight of the poor, and his own early experiences of poverty are all contained in these stanzas.

William Blake didn’t fit the mould, even as a child. His father, a hosier, passed on the family business to William’s older brother, James. Peter Ackroyd writes that William developed an ‘extreme horror for financial concerns of any sort’ and, indeed, our Blake remained poor until his death. Ackroyd explores the idea that Blake didn’t quite fit in. He didn’t look like his dad. He didn’t get along with much of his family. He felt that his older brother was the favourite. He was home-schooled, it seems, because his father feared that he would not be able to behave at school.

A solitary character, Blake developed his knowledge and understanding of the world without a schoolroom, a teacher and classmates, but rather through the windows of his house in central London (the family lived in Soho). He also took to his feet and walked London – this pounding the streets is a feature of his childhood routine that is well documented across the Blake biographies. BBC Bitesize gives our students this neat summary of this facet of his life: “Blake lived and worked in the capital, so was arguably well placed to write clearly about the conditions people who lived there faced.” Bitesize serves its purpose and audience well, but it’s compendious by nature and this is one of the moments in which I feel that we (or Blake!) are being sold short. Blake did live and work in the capital, but this hardly expresses the depths to which he knew London. London was his first love. He breathed in London and exhaled a tangle of emotion about the place into his poetry and artwork:

“His London was a filthy, miasmic place, abounding in perverse energy and wild ideas, and this is reflected in his whirling, punky engravings.”

Blake explores ideas about London across many works, and it’s important that this backdrop is understood by our students; London is not Blake’s only exploration of the capital. Blake knew London inside out and this is carried in his writing. His longest poem, the epic Jerusalem: The Emanation of the Giant Albion evinces his ardour for the place, across several stanzas of the second book:

The fields from Islington to Marylebone,
To Primrose Hill and St John’s Wood,
Were builded over with pillars of gold,
And there Jerusalem’s pillars stood.

In his first draft of London, Blake describes:

The german forged links I hear

Which our students will know as:

The mind-forged manacles I hear

Both Ackroyd and the British Library explain the first version as “a reference to the Hanoverian and Hessian mercenaries brought in to withstand a French invasion or maintain public order in the event of mob rule.” You can read the original British Library article here and see the original facsimile too. The important point, though, is that Blake’s edit is a political one; ‘manacles’ is “a code-word that was directed at the oppression of the authorities.” This is a significant shift, especially for the context of the P&C cluster; we can now see Blake’s subversion within the poem. It’s a protest word. Interestingly, the original draft also used the word ‘dirty,’ to be replaced by  ‘charter’d’ – The British Library explains this succinctly: “‘Dirty’ describes this state of moral and physical degeneration but it doesn’t have the political weight of the later term: ‘charter’d’.” (my emphasis).

How does London fit with Power & Conflict?

London shows us Blake’s tenderness towards the vulnerable: the plight of the chimney-sweeps; the disease-ridden child prostitutes; the soldiers whose blood was on the hands of the establishment. We see conflict between his anguish and his position of being a passive observer – after all, he views all of this on a ‘wander’. We see conflict between his own belief in God and his anger and frustration at the church’s reluctance to truly deliver the Christian messages they preach, despite the power they hold. We hear the conflict between the barbaric neglect by the state and the innocence of the young girls, the chimney-sweeps and the even the soldiers with his simple, rhythmic, child-like repetition, sharply juxtaposed with the gruesome content.

These harrowing four stanzas fit perfectly into these themes. The poem gives us a zeitgeist of the era; an eye-level view of London as Blake saw it, lived it and cried over it.

Image sourced from Google, labelled for reuse with modifications.