This is a personal one. It’s about tenacity and how we can get things right with practice.

This is not my story. You can read the original here. If you don’t have time to read the story, here’s a synopsis: the king sends many envoys to the calligrapher, asking for the commission to be completed promptly. Each envoy returns empty handed. Eventually, burning with rage, the king visits the calligrapher himself. The calligrapher picks up a pen and completes the commission in two minutes. The king asks, ‘If it is so easy, why have I had to wait so long?’ and the calligrapher responds by opening ceiling-to-floor double doors at the back of the studio, and allowing thousands of study drawings to pour out.

And this is exactly how it is with calligraphy. When we see a beautiful piece of writing, we only see the product of the mastered skill. We see clear, fluent lines or beautifully smooth, rounded uncial script. We don’t see the hours and hour of grafting. The practice. The stiff shoulders. The nausea at the ink (some pigments really stink). The bleeding fingers from fiddling with the reservoir. The finished piece, marred in the final moments by a careless moment with an overloaded nib. The absolute frustration of a sticking point on a new letter.

My grandad, Harry Burden, was born into a family of ship-builders. His dad was a shipbuilder on the first Dreadnought. My grandad left school at a young age to work on the ships in Portsmouth. However, in the evenings, he continued his studies – primarily mathematics and penmanship. His tenacity with the maths resulted in a place in Dockyard School. As for the calligraphy – well, he passed these skills to me and it’s only now, in my fortieth year, that I have come to understand what I have really learned from this.

It’s not very glamorous, learning calligraphy. There are a huge (but thankfully finite) number of shapes to learn, and from these you can write anything. You have to draw the same shape over and over again, although saying it like this doesn’t even begin to cover the gruelling nature of it. Of course, you can skip steps and jump straight in to full letters, but taking shortcuts usually results in poor letter form in years to come.   Here are some of my old practice sheets:

Hours and hours on the same lines and shapes.

These are the tip of the iceberg. I have probably drawn tens of thousands of strokes. Niels Shoe Meulman, the original Calligraffiti writer and author of the story at the start of this blog, happily shares pictures of his drafts: 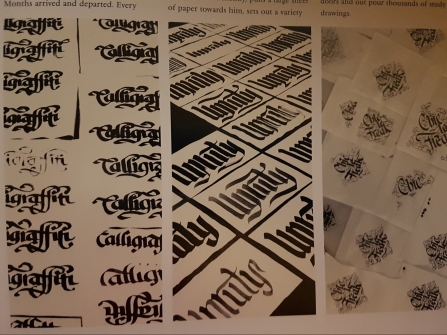 From Calligraffiti by Niels Shoe Meulman. From Here to Fame Publishing. 2010.

When you’re writing calligraphy, things can go horribly, horribly wrong, often/especially when you’re finishing off. I usually use a dip nib. The reservoir (the bit of metal that clips to the back of the nib) is prone to ink surges. The technology hasn’t moved on from Classical Civilisation – a metal dip nib was recovered from Pompeii, in fact. It’s fairly unforgiving. I could be about to finish off my last stroke and a big fat blob of ink will manage to fly into the centre of my work. I have to start again. No tippex will cover that kind of error and no amount of clever artwork will disguise it.

Sometimes, I think I’ve done a brilliant piece of work and it’s only when I stand back that I realise my rhythm is wrong, or my kerning is out, or my ascenders are at slightly different angles. We’re talking about fractions of angles. I have to start again.

Often, I lose concentration and make a stupid, stupid mistake. When I’m tired, I always make the same blunder – I put a crossbar on a C. It drives me nuts. Look, here are two examples (the first ‘voice’ and ‘dance’) where I’ve crossed the C. If you’re wondering why I don’t stop after the mistake, I think ‘I might as well use up the paper’ and experiment a bit, including this rather clumsy P descender: 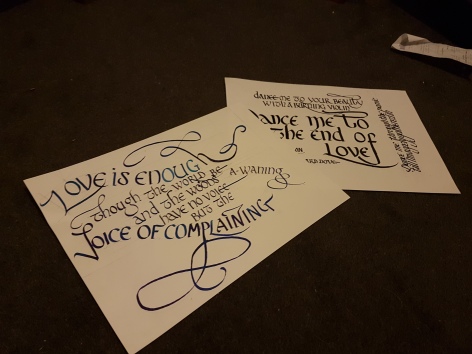 Things can go horribly wrong – don’t bin the mistakes. Use them to carry on and experiment.

Look at this illuminated letter (it’s a T in uncial script). It looked brilliant, when I did it. It’s for a passage from The Hobbit. Usually, illumination comes last, especially if you’re using resist (a sort of PVA to block certain areas) or if you’re using any kind of leaf. Anyway, I’d finished the piece and then started to illuminate my T. Halfway through, I realised what a ropey job I was doing. I was using the wrong nib because I couldn’t be bothered to boil a new one. The T is scrappy, uneven and messy. I’d have lost a hand if I were the king’s illuminator. I had to start again.

Why this? Why now?

The only way to get good at something is to do it a lot. I know the 10,000 hours thing is no longer a thing (!) but I believe the following about teaching English: